Samantha's Trollers Are Having A Feast 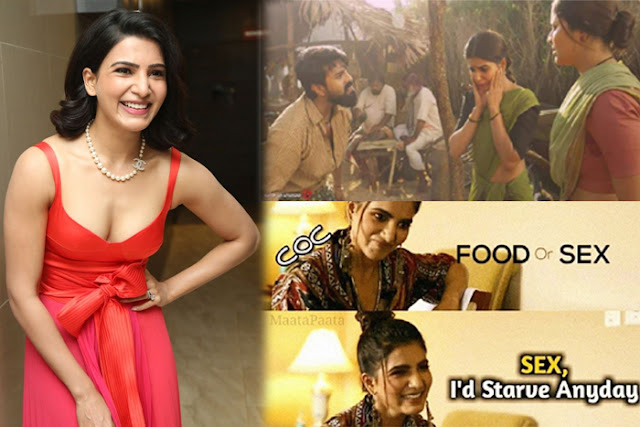 It has been two days since Samantha commented that liking a film as a story (Arjun Reddy here) and disliking the comments made by Sandeep Reddy Vanga (violence is also a form of expressing love) are two different things. The thing is that trollers are having a feast as Samantha shared this opinion.
Earlier after someone pointed out that she is following double standards by liking Arjun Reddy but criticising Kabir Singh, the actress gave clarity like above. However, trollers are quick to point out what kinds of things Samantha has said in media and what she has done on the screen.

In Rangasthalam movie, Samantha gets slapped by Ram Charan and some netizens expressed how come she supported toxic masculinity back then. They shared screenshots of that particular scene as well. Then comes her interview to JFW magazine where she answered the question, 'food or sex?', by saying, 'Sex, because I can starve anytime'.

And the trollers say- if Samantha has the freedom of saying that sex is her priority, won't Sandeep Reddy have the freedom of hitting someone who is in love with? It's a personal choice, few felt (which is not anyway).

Some others shared the images of Samantha from Oh Baby pre-release event where she flaunted her glamour big time and pointed out, "If you could wear whatever you like despite being a married man, why can't Sandeep Reddy say and film what he likes?".

An online poll conducted by a website has seen 70% of the people supporting Sandeep Reddy Vanga over his violent love his comments.

Many feel that Samantha, being a star heroine, shouldn't have invested her time into this controversy, as that is spoiling more of her image.
on July 09, 2019