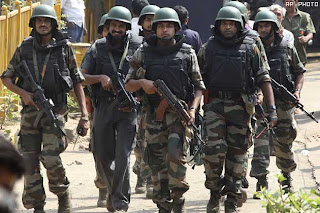 If the judge feels Kasab’s crime fell under the judicial definition of "rarest of rare" and death by hanging was well deserved, Kasab will set out on a long journey where legal and moral issues will be considered by authorities for years, even decades, before he is finally put to death.

Immediately after pronouncement of the death sentence judge Tahaliyani will have to send his order for confirmation to the Bombay HC. He is bound by the Section 366 of the Criminal Procedure Code to do so. In normal cases it is the convicted man who goes in appeal to the HC but where it is the case of his life being taken away, the trial court must send the case papers to the high court.

The Bombay HC will call for all the evidence and weigh it at its own discretion. It is a practice for the high court to be satisfied on the facts as well as the law of the case, that the conviction is right, before it proceeds to confirm the sentence. This could take a few months.

Going by past record, the longest wait in execution of the death sentence will start once it is out of hands of the judiciary and into the domain of the government. After the Supreme Court too gives assent to the death sentence, Kasab will have the legal right to file a mercy petition before the President of India under article 72 of the Constitution. While this petition is pending Kasab's execution will stay suspended — maybe for decades.

The President's powers under Article 72 are always exercised with the aid and advice of the Council of Ministers. There is no time limit for how long this consultation takes place and the whole process can remain in abeyance for years. Currently mercy petitions of 32 death row convicts are pending decision with the President for over five years and the oldest mercy petition dates back to 1998.