Ranbir Kapoor and Alia Bhatt, along with Neetu Kapoor, Soni Razdan and others were in Ranthambore to usher in 2021. There was a growing buzz that Alia and Ranbir may get engaged in the national reserve, however, the rumoured were quashed by Ranbir's uncle and Kareena Kapoor Khan's father Randhir Kapoor. 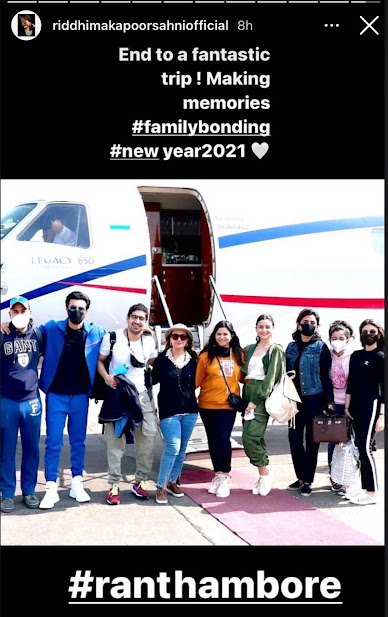 Now, as their trip ends, Ranbir's sister Riddhima Kapoor Sahani took to Instagram Stories to share a happy picture. "End to a fantastic trip! Making memories #familybonding #newyear2021 #ranthambore," she wrote over the photo featuring, Ranbir and Alia, their mothers Neetu Kapoor and Soni Razdan, their sisters Shaheen Bhatt and Riddhima among others. Filmmaker Ayan Mukerji was also spotted with the family.