YS Sharmila’s political aspirations and ambitions are clearly taking a shape. As she is holding a high-level meeting with the die-hard fans and supporters of late YSR at Lotus Pond, the flexis and publicity posters near Lotus Pond are catching the attention of onlookers. The poster features entire YS family without AP CM YS Jagan. YS Sharmila is seen with late father and former CM YS Rajasekhar Reddy and mother YS Vijayamma. 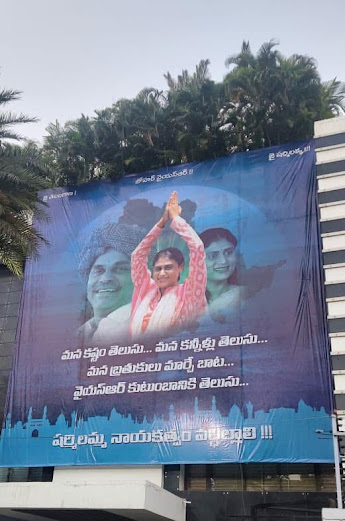 It is conspicuous that the photos of brother YS Jagan and sister-in-law YS Bharati have been willfully avoided in it. This has become hot topic among YS fans. As several media reports speculated earlier that there are disputes between YS Sharmila and YS Jagan and there are differences between the duo, these posters are just adding fuel to such rumours.