Ram Gopal Varma is on cloud nine ever since the release of Ram starrer “iSmart Shankar”.
The film is having a dream run at the box-office. Well, this success should be celebrated more by its maker Puri Jaganandh. 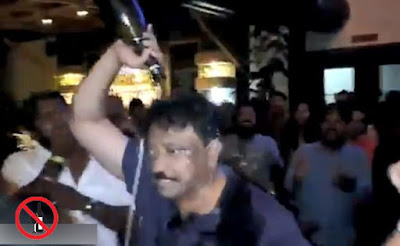 But it is Ram Gopal Varma who is tweeting relentlessly about the collections of “iSmart Shankar” and retweeting all the positive articles and tweets about the movie.
Ram Gopal Varma is no way connected with the film. Then why is he overdoing?
Puri Jagannadh is Ram Gopal Varma’s dearest friend. From a long time, Puri and RGV are hanging out together like thickest friends.
Puri was an assistant director to Ram Gopal Varma’s Shiva (Hindi version) but they have become friends once Puri established himself as a top director.
Ram Gopal Varma even went to Sri Ramulu theater, a single screen in a mass locality, on a bike. He was a pillion rider and didn’t wear a helmet either.
He posted, “RX 100’s Ajay Bhupathi, Lakshmi’s NTR’s Agasthya and me on a bike triple riding without a helmet on our way to see #issmartshankar.”
Such is his hungama about this film. He is going extreme lengths to celebrate its success.
He even posted an video partying last night in which it is seen RGV pouring beer on his head in the nasha.