First Look of Nithin As Bheeshma!

Nithin is back in action after a very long time. He took a long break after suffering triple disasters in a row.
He is finally on the sets now and is busily shooting for Bheeshma directed by Venky Kudumula.
The young director has impressed everyone with his debut outing Chalo, which was one of the surprise hits of last year.
Nithin and Rashmika have been paired up for Bheeshma a romantic entertainer bankrolled by Sitara Entertainments. 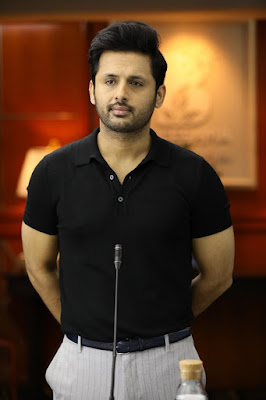 Although the title sounds slightly off trend, the first look of Nithin will clear all the doubts that it is a trendy film with contemporary setting and characters.
It seems to be a serious scene as Nithin is addressing a board meeting (presence of water bottle and a mic). His styling is impressive and he is looking handsome with a new hairdo.
Nithin wouldn't go film-less this year as Bheeshma is eyeing December 6th release. The film will be completed without any breaks in between.
on July 11, 2019