BiggBoss3 Off To A Glittering Start

Amidst a lot of excitement and controversies, the third season of the hit reality show 'Bigg Boss' has finally off in a glittering style tonight. Nagarjuna's charming presence as the host has added the extra zing to the show. 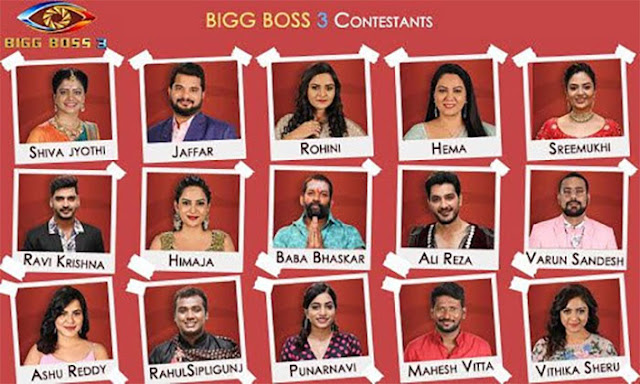 While interacting with the audiences, Nag kicked off Bigg Boss 3 by remembering how NTR and Nani had hosted the show's first and second seasons respectively.

He then introduced all the 15 contestants and later saw them off to the Bigg Boss house, where the will spend the next 100 days, fighting for the title and the cash prize.

TV celebs Shiva Jyothi and Ravi Krishna were the first to enter the Bigg Boss house, followed by Instagram star Ashu Reddy, who's popular as Jr. Samantha. Popular TV9 journalist Jaffer was the next to enter the house.

It was then the turn of actress Himaja and playback singer Rahul Sipligunj to step into the house and interact with their fellow contestants. Actress Rohini, choreographer Baba Shankar and Uyyala Jampala fame Punarnavi Bhoopalam is the next celeb to make a colorful entry into the house.

Popular character artiste Hema and TV star Ali Reza, upcoming comedian Mahesh Vitta and hotshot anchor Sreemukhi are the next to debut on the Bigg Boss show. Finally, hero Varun Sandesh and his wife Vithika Sheru are the last contestants to enter Bigg Boss house. All the contestants will soon be given special tasks and eliminations will follow each week.
on July 22, 2019